Every process, no matter how it came into being, has at least one stack for the purpose of running itself. The programming language can be anything but it needs a stack to run. As usual is the custom we will write a c program to explain the concepts in a more detail. Before that we will have a basic understanding of why a stack is used and what’s its purpose (If you are really new to this world, then you should see what is stack first). Why stack?

Accomplishing a task with a computer program involves many steps, some steps can be repeatitive. This is the basis of the evolution of programming languages, functions. Functions can eliminate the repeatitive steps in your program. Assuming we never invented or know how to use stacks in computers, lets think about the program execution. The below will be missed out if we don’t have a stack.

With such great advantages of a stack, all computers (microprocessors, microcontollers etc) have built-in support for stack.

The working of a stack

A stack is created when a process starts to run. The stack placement is based on the operating system and architecture of the microprocessor. On a x86 machine, the stack will be placed at the top of the address space of the process, and then it grows down. The Linux kernel makes an anonymous mapping of a memory area for the stack and sets VM flags with VM_GROWSDOWN. So on a page fault the kernel maps more memory for the stack, which equals a PAGE_SIZE, starting from the end of the stack (stack top). Theoretically stack can grow until there is no more room in the memory. But usually the stack size is limited by the system configuration.

When there is no limit we should ideally expect the program to be killed only when we run out of memory (OOM), but we have something called stack overflow too, which can occur even when enough physical memory is available. Stack overflow occurs when stack grows down and reaches the region where the next segment is present, which is the memory mapped area. So there is a hidden limit. To clarify lets see a rough layout of a process in memory. The next segment, which contains the memory maps for shared library etc. is placed after rlimit size with some offset. The following diagram can explain better. 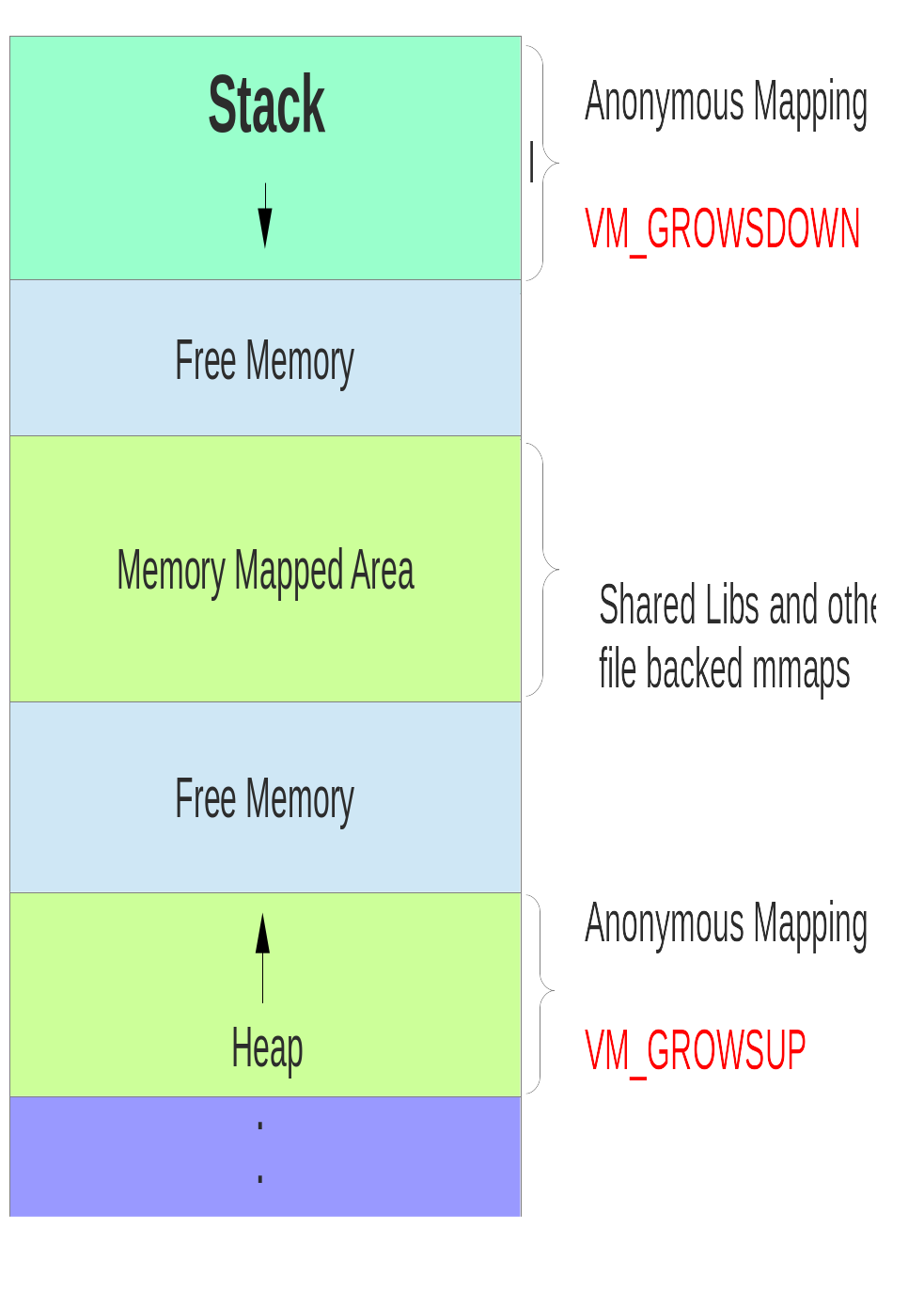 Does stack always grow downwards? Not for all architectures. At least in IA64 the stack grows up, so kind of the above diagram inverted.

Above the stack is the kernel space, and below the heap are the other sections of the program, like the BSS, Data, Text (Code) etc. etc., which we will take up in a later article.

Contents of a stack

Before getting into the details of what constitutes the stack, we will touch upon the hardware support for stack. Most hardware have good support to make stack usage very efficient. Usually a dedicated register is used to save the address of the top of stack, called the stack pointer. Also instructions are provided for pushing and popping elements in and out the stack. In x86 the stack pointer register is called ESP1.

Let’s start with an example program.

In the above example code, the first function to be called, as you should already know, is main, which has a frame for itself. That frame holds all the variables inside the function. These variables unlike global variables are not even part of the final code generated, they are created during runtime and all references of it are offsets from EBP, so a and b in function main will be referred to as EBP - 4 and EBP - 8 respectively. In the below assembly code of beginning of main, the variable creation can be found, but this case its referred using offsets from ESP, but conceptually both are right.

Since EBP = ESP after mov %esp, %ebp, the new stack frame is created by moving SP 32 bytes down, so now the next line of code mov $10, 28(%esp), which means, move value 10 to address at ESP + 28, which also means EBP - 4. Let’s print addresses of SP and FP in both the functions and see what else is we can discover. The following snippet shows how you can print the EBP and ESP in a C program.

If you see clearly, printing all the addresses of the variables, the frame pointer and the stack pointer of the main function, you will find that there are some extra space in the stack, which is used for storing the return address and the frame pointer of the current frame before calling add(). We will see in detail about those in the next part of this article, where we will talk about the x86_64 ABI, which is a little different from what we have seen here about the 32 bit architecture (unfortunately there is no one size fits all solution).

Continue reading other posts in the series, "Life of a process"